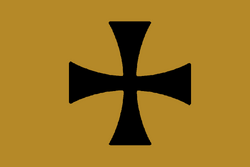 The Ostrogoths were the eastern tribe of the Goths (a Germanic people) who rose in power in the area north of the Black Sea. The designation, Ostrogoth, taken to mean `Eastern Goth’, actually means `Goths glorified by the rising sun’ and gave birth to the term Visigoth (interpreted to mean `Western Goth’) by the Roman writer Cassiodorus who coined the term in the 6th century. Cassiodorus lived among the Ostrogoths and served their king Theodoric the Great. In an attempt to simplify the designation between the Germanic tribes which had moved toward the west, and those who remained in the east, Cassiodorus, deliberately or mistakenly, interpreted `Ostrogoth’ to mean `Eastern Goths’ and the others then became `Western Goths’ but the people themselves did not think of themselves along those lines. The Visigoths would, in time, accept and apply that term to themselves and the Ostrogoths had long known themselves by that name but neither tribe would have considered themselves `eastern’ or `western’ Goths.

Retrieved from "https://history.wikia.org/wiki/Ostrogoths?oldid=25506"
Community content is available under CC-BY-SA unless otherwise noted.