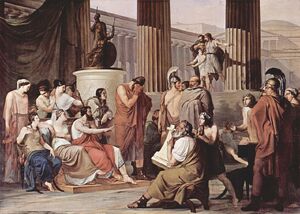 Mythology (from the Ancient Greek: μῦθος, muthos, meaning "story", or "narrative") is the study of traditional stories, tales, legends, and folklore; or a collection of myths, especially belonging to a particular religious or cultural tradition.[1] The word mythología [μυθολογία] appears in Plato, which was used as a general term for "fiction" or "story-telling" of any kind.[2]

In classical mythology, mythology was the subject of Latin author Fulgentius in his fifth-century work: Mythologiæ, which concerns the explication of Greek and Roman stories about their gods.[3]

In modern society, Scholars in the field of cultural studies research how "myth" has worked itself into modern discourses, where mythology is applied to certain genres or "universes" in the entertainment industry of television, cinema and video games.[4]

In academia, the term "myth" often refers to stories whose culture regards them as true (as opposed to fictitious).[5] Thus, many scholars will call a body of stories "mythology", leaving open the question of whether the stories are true or false. For example, in Tree of Souls: The Mythology of Judaism, English professor Howard Schwartz writes, "the definition of 'mythology' offered here does not attempt to determine if biblical or subsequent narratives are true or false, i.e., historically accurate or not".[6]

Most religions contain a body of traditional sacred stories that are believed to express profound truth. Some religious organizations and practitioners believe that some or all of their traditional stories are not only sacred and "true" but also historically accurate and divinely revealed and that calling such stories "myths" disrespects its holy status.[7][8] Other religious organizations and practitioners have no problem with categorizing their sacred stories as myths.[9][10][11] In terms of etiquette, the word "tradition" is often used in place of "mythology" when referencing belief systems of other religions, such as "Christian tradition", or "Islamic tradition".

Early Christians contrasted their sacred stories with "myths", by which they meant false and pagan stories.[12][13][14]

Christians predominantly object to associating Christian stories with "myth" due to several reasons: (1) ancient mythologies are often associated with polytheism and paganism,[15][16][17] (2) the term "myth" is often used to indicate falsehood or non-historicity–especially by critics,[15][16][18][19][20] and (3) the lack of an agreed-upon definition of "myth".[15][16][20] However, some modern Christian writers such as C.S. Lewis have described elements of Christianity, particularly the story of Christ, as "myth" and also as being "true"–thus being "true myth".[21][22][23]

Neopagans frequently refer to their sacred stories as "myths". Asatru, a modern-day revival of Germanic Paganism, holds "that the Eddas, Myths and Norse Sagas are the divinely inspired wisdom of [its] religion".[24] Wicca, a Neopagan movement, also applies the term "mythology" to its stories.[25]

Retrieved from "https://history.wikia.org/wiki/Mythology?oldid=26817"
Community content is available under CC-BY-SA unless otherwise noted.