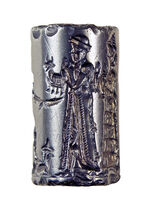 Old Babylon concerns the occupation of the Amorites in Babylon since the 19th century BCE. Their occupation stretched throughout southern Mesopotamia. The Amorites were nomadic tribes from the northern Levant who were Northwest Semitic speakers, unlike the native Akkadians of southern Mesopotamia and Assyria, who spoke East Semitic. The Amorites at first did not practice agriculture like more advanced Mesopotamians, preferring a semi-nomadic lifestyle, herding sheep. Over time, Amorite grain merchants rose to prominence and established their own independent dynasties in several south Mesopotamian city-states, most notably Isin, Larsa, Eshnunna, Lagash, and later, founding Babylon as a state. (Full article...)

About the History Wiki

NOTICE: The History Wiki is still being updated as much as it can be, we can use all of the editors we can get.
Retrieved from "https://history.wikia.org/wiki/Main_Page?oldid=18887"
Community content is available under CC-BY-SA unless otherwise noted.