Interior of The Royal Panopticon, later known as the Alhambra Theatre 18 March, 1854

The Royal Panopticon of Science and Art, 1851. It was an imposing iconic building flanked by 100 ft minarets

Wyld's Great Globe in the centre of Leicester Square. 60 feet hollow globe contained a staircase and elevated platforms which members of the public could climb in order to view the surface of the earth on its interior surface, complete with mountain ranges and rivers all to scale. 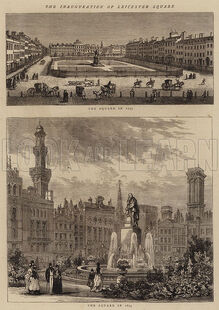 4 July 1874 - The Inauguration of Leicester Square.
Add a photo to this gallery

I'm writing an article about history of Leicester Square in London, building by building. Will post the draft here, and improve it Dinki (talk) 21:55, March 19, 2018 (UTC)

Leicester Square and its surroundings in 1658, from Faithorne's map of London and Westminster; drawn by Richard Newcourt

Drawing of Leicester Square in 1750

Leicester Square, with the Design for a Proposed New Opera House. 1790. Oil on canvas. The painting probably represents R. B. O'Reilly's plan. The elevations shown are here are however, consistent with the ground plan by Sir John Soane. The gardens are planted with trees and flowers in informal, colourful taste of William Mason and fashionable contemporary gardening.

1874 - Leicester Square; its associations and its worthies. By Tom Taylor (engraving)

The Inauguration of Leicester Square. Illustration for The Graphic, 4 July 1874.

"HERE IN THE HEART OF THE GAYEST PART OF WEST END ARE SITUATED THE ALHAMBRA AND EMPIRE, CELEBRATED FOR THEIR GORGEOUS BALLETS. NEAR AT HAND ARE MANY OTHER LEADING THEATRES AND MUSIC HALLS. THE STATUE IN THE SQUARE IS ERECTED TO THE MEMORY OF SHAKESPEARE"

The dazzle of Leicester Square. Illustration for The New Lights O'London 1926 Artist Donald Maxwell
Add a photo to this gallery

and Leicester Fields, as the place used to be styled, were a favourite resort of duellists. 1865 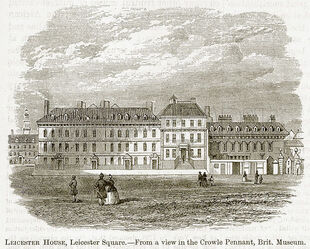 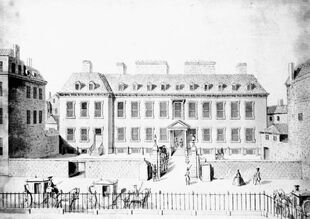 Leicester House, 1748.
Add a photo to this gallery

Sir Ashton Lever - At first he collected live birds, and his aviary at Alkrington was then reputed to be the best in the kingdom. About 1760 he purchased at Dunkirk several hogsheads of foreign shells, and for a time his whole attention was taken up with shells and fossils. Stuffed birds next occupied his attention, and ultimately all kinds of natural objects and savage costumes and weapons were added to the collection, which became famous and attracted many visitors. In 1774 he was induced to remove his museum, to which he gave the name of the ‘Holophusikon,’ to London. Taking Leicester House, in Leicester Square, he filled sixteen rooms and various passages and staircases with his curiosities, and advertised that they were to be seen each day from ten to four, ‘admittance 5s. 3d. each person.’ </b>He was a good naturalist, and a man of varied accomplishments, but grew eccentric in dress and manner. </b>Madame d'Arblay has left a curious picture of the grotesque figure he presented when she visited the museum in 1782 (Diary, ed. Barrett, i. 495).

Excessive outlay on the museum impaired his fortune. After it had been valued before a parliamentary committee at 53,000l. it was offered at a moderate sum to the British Museum in 1783, but the museum trustees declined to buy it. In 1788 Lever obtained an act of parliament to dispose of it by a lottery of thirty-six thousand tickets at a guinea each, of which, however, only eight thousand were sold. The museum fell to a Mr. James Parkinson, who exhibited it in a building called the Rotunda, erected for the purpose on the Surrey side of Blackfriars Bridge.

“Marx's early days in London were those of abject poverty. Evicted from their lodgings in Chelsea the Marx family decamped to the German Hotel in Soho. In those days the German Hotel was the home of many revolutionary exiles from Germany Austria, Italy and France. They stayed there in April and May 1850 but had to leave again when they were unable to pay the £5 a week rent.

One morning our host refused to serve us our breakfast and we were forced to look for other lodgings. - Jenny Marx

Is where the Swiss Centre was until demolished in 2008, the original clock sadly went with it. But in 2011, Westminster Council rebuilt the glockenspiel just a few metres from where it originally stood, along with a restored clock, which is now controlled remotely from Derby. Every hour, the figurines, representing traditional Swiss farmers, move.

In 1748 the statue of George I, which was later to be the subject of much verbal and physical abuse, was erected in the centre of the garden (Plate 50c, fig. 99). The statue represented the King 'on horseback in Armour', with 'Trophies of Warr' on the panels of the pedestal. It had been modelled by C. Burchard in about 1716 for the first Duke of Chandos and erected in the garden of his house at Cannons; John van Nost, the elder, had cast and gilded it. (fn. 158) The second Duke of Chandos was groom of the stole to Frederick, Prince of Wales, (fn. 24) and it was presumably he who gave or sold the statue to be erected in the square, shortly before the demolition of Cannons in c. 1750. (fn. 77) It was 'uncovered' on the occasion of the Princess of Wales's birthday on 19 November 1748.

The equestrian statue of George I is reliably stated to have been buried several feet beneath the centre of The Great Globe of James Wyld.

After the removal of the globe in 1862 the statue had been replaced in its former position, 'with one leg, astride a goblin horse on three legs, propped by stakes', (fn. 191) and on at least one occasion the effigy of the King had been 'thrown from its saddle to the ground'. (fn. 161) During the night of 16–17 October 1866 a number of practical jokers, assisted by the property-room artists of the Alhambra, embellished the grotesque object with a dunce's cap, a broomstick and a rash of painted spots (fn. 192) (fig. 99). 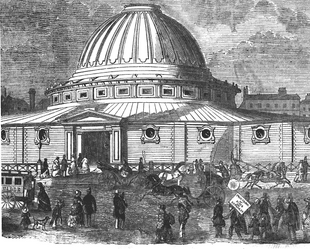 This image of the Globe (with completed galleries) shows a placard bearer in the foreground advertising one of Wyld's competitors: The Panorama of Paris and Versailles.

– featured painted panoramas in a large circular building located just off Leicester Square in 1792. The artist responsible was Robert Barker and displayed exhibits of city views including New York and Jerusalem, and sieges of Sebastopol and Lucknow. Northeast of the Sqaure.

The Prince Charles Cinema on Leicester Place, just north of Leicester Square, is known for its quirky lightbox messages. What fewer people know about is the toilet cubicle named after film director Kevin Smith. Apparently, on visiting the cinema for a Q&A session in 2007, Smith complained that Quentin Tarantino had a bar named after him, despite never having visited the cinema. So the cinema staff did the only decent thing and named a toilet cubicle after him, complete with framed photo on the cubicle door. To add insult to injury, the toilets have been swapped in recent years, so the Kevin Smith Cubicle is now in the ladies.

The Royal Panopticon of Science and Art Edit

An Engraving of the Royal Panopticon of Science and Art - From 'The Builder' Vol 9, December 1851.

The Royal Panopticon of Science and Art, Leicester Square, London; dated 1854.]]Drawing of the exterior (note Sabloniere Hotel on the right

The Royal Panopticon, later known as the Alhambra Theatre in Thomas Hayter Lewis's, 'The Builder' Vol.XII, No.580, 18 March, 1854. Victoria and Albert Museum, London

The Luminous Fountain at the Panopticon Leicester Square

Wonders of Panopticon
Add a photo to this gallery

The Caverns of Ice at the Alhambra, Leicester-Square. Illustration for The Illustrated London News, 3 August 1867

Leicester Square, the Alhambra Theatre, from the Gardens. Photograph from Round London (George Newnes, 1896).

Black and white postcard showing the façade of the Alhambra Theatre, within a streetscape of Leicester Square in London. It is a symmetrical façade in three major bays, with a second floor balcony on each outer bay. A long canopy stretches the breadth of the building over various doorways and signage at street-level. The name ALHAMBRA appears on a large sign high up on the central bay.

Visits to London’s music halls provided subject and inspiration for many of Spencer Gore’s paintings. He frequently haunted the Alhambra Theatre of Varieties in Leicester Square, the setting of this picture. Here Inez and Taki, possibly a Spanish double act, play nineteenth-century lyre guitars at stage right. 1910

National fund for the Welsh troops. Grand Matinee, St. David's day, March 1st, at the Alhambra, Leicester Square, W. Poster showing a soldier from behind, as he faces a bright light on the horizon, possibly an explosion or dawn. Date 1915.

Front of Alhambra Theatre c.1936
Add a photo to this gallery

The building was demolished in 1936.

Odeon auditorium from the stage. 1930s

Pix of LSQ before 2012 renovationEdit

Was next to Alhambra. Famous for its French cooking and conversation. It was located on the east side of Leicester Square from 1788 to 1867. https://www.lookandlearn.com/history-images/XJ104460/Paglianos-Sabloniere-Hotel-Leicester-Square-London?t=0&q=leicester+square&n=64

Picture - The view is west from Panton Street on the south side of Leicester Square http://leicestersquarecityblock.myblog.arts.ac.uk/files/2013/11/leicester_sabloniereUD.gif

the Western Literary and Scientific InstituteEdit

Located on the west side of Leicester Square and founded in 1825 by a group of professionals and scientists. The organization was open to members only, and included a library, classes, and lectures on topics in literature and science.

https://www.flickr.com/photos/warsaw1948/6928477928/in/album-72157629469822347/ The London Hippodrome was built in 1900 by Frank Matcham for Edward Moss for £250,000 as a hippodrome for circus and variety performances. The venue gave its first Circus show on 15 January 1900. The first show ever given was a music hall revue entitled 'Giddy Ostend' with Little Tich and (in one of his first roles) Charlie Chaplin. Entry to the venue was through a bar, dressed as a ship's saloon and the performance space featured both a proscenium stage and an arena that sank into a 230 ft, 100,000 gallon water tank (400 tons, when full) for aquatic spectacles. The tank featured eight central fountains, and a circle of fountains around the side. Entrances at the side of the auditorium could also be flooded, and used for the entry of boats. Shows included equestrian acts, elephants and polar bears, and acrobats would dive from a Minstrel Gallery above a sliding roof, in the centre of the proscenium arch. The auditorium featured cantilevered galleries, removing the columns that often obstructed views in London theatres, the whole was covered by a painted glass retractable roof, that could be illuminated at night."

Photo stream https://www.flickr.com/photos/warsaw1948/6928479616/in/photostream/ Among others: old pictures of Hippodrome (front & interior) OLD Radisson Pastoria (photos) Voice of Darth Vader stayed in Pastoria Hotel when in London http://www.londonhotelscentre.com/pastoria.htm http://www.cntraveler.com/story/west-elm-hotels-is-revolutionizing-the-hotel-industry http://www.cntraveler.com/story/you-can-have-a-michelin-star-picnic-in-londons-hyde-park Phone Booth in front of Hampshire Removed during 2012 renovation, but Sir Micheal Caine came with his name just in front of our hotel! “Actor Sir Michael Caine was given the name Maurice Joseph Micklewhite at birth. While on the phone to his agent from a phone box in Leicester Square, he was told to come up with a stage name — until this point he was working as Michael Scott, but there was already an actor by this name in London. He looked up at the nearby Odeon where The Caine Mutiny was showing, and the rest is history. In 2016 he changed his official name to Michael Caine.”

Apex, as the name suggests, occupies a corner and a spectacular corner it is, being on Leicester Square in the heart of the West End.

Imagination and thought have gone into the setting and the cuisine. Be prepared for combinations of texture and taste that will surprise and delight. Roasted scallops and black pudding with cream shallots sauce and truffle oil head the choice of starters, with pickled ox tongue, red peppercorn salsa and creamed horseradish another example of derring-do. Main courses offer similar forays into new and exciting combinations: baked cod fillet with bubble and squeak and lime and red wine sauce: grilled mackerel fillets with leek and potato sausage and sweet tomato sauce.

Retrieved from "https://history.wikia.org/wiki/London?oldid=24947"
Community content is available under CC-BY-SA unless otherwise noted.