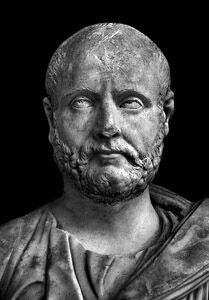 Carinus was Roman Emperor from 282 to 285. The older son of Emperor Carus, he was first selected Caesar and in the beginning of 283 co-emperor of the western part of of the empire by his father. Official accounts of his personality and career have been filtered through the minds of his successful fighter against, Diocletian.

Retrieved from "https://history.wikia.org/wiki/Carinus?oldid=22698"
Community content is available under CC-BY-SA unless otherwise noted.